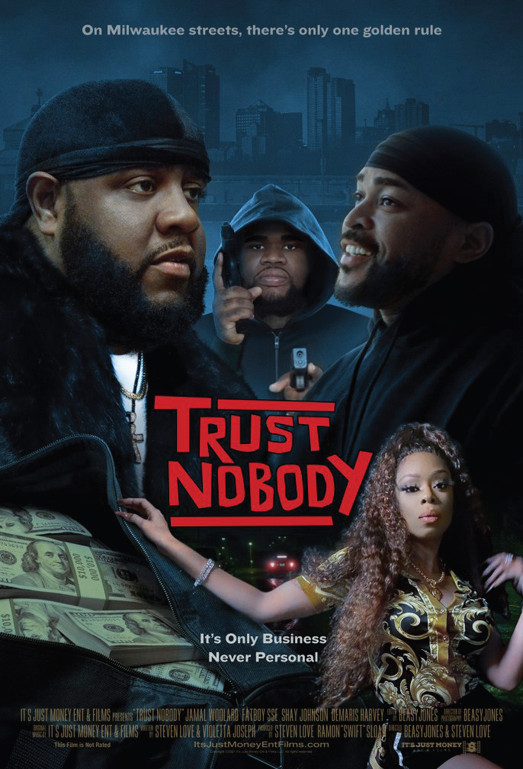 “Trust No One” movie poster

Sometimes a book is just meant for the big screen. While a page-turner can help pass the time, there’s just something about seeing a character and feeling their emotions.

Ten years ago, Steven Love wrote a screenplay about a local hustler resuming his life and business after a four-year stint in prison. He knew the story embodied the ambition of the hustler in the context of his hometown.

He released a trailer with himself to promote the book, and movie requests started coming in.

When the story became a novel, and ultimately an Amazon bestseller, he knew it had the potential to be a hit, but it was the fans who pushed him to bring his vision to life.

“After selling over 10,000 copies of the first book, people kept telling me to make a movie out of it,” Love said.

The tragic street tale follows the main character, Bricks, as he attempts to rebuild his business and earn respect on the streets of Milwaukee. After spending years behind bars, he realizes that the game has changed and so have his alliances.

Eventually, as Bricks fosters new deals between the street crews and life seems to be back on track, he is thrown into a cycle of paranoia and violence. While the links are being tested, Bricks can only really trust one person – himself.

“Trust Nobody” was produced by Love’s “It’s Just Money Ent & Films” and premiered in August at Mayfair Mall. The 90-minute drama is now available to stream on all platforms.

The film’s main man, Jamal Woolard is an actor and comedian who has starred in countless films, including the role of Notorious BIG in “NOTORIOUS” and “All Eyez on Me.”

Love also tapped local and Midwestern talent, including Shay Johnson, who was featured to the world on Love & Hip-Hop Atlanta/Miami, as well as Demaris Harvey and Cierra Angelina from Michigan.

The film also features a tracklist of some of the hottest music composed by Milwaukee’s own super-producer, Chris “Godxilla” Taylor.

“You want to see Milwaukee’s black community make history, go to Amazon and watch it. It’s very entertaining, and I’m proud to be a part of it,” Taylor said in a Facebook post.

From hard copies to HD screens, Love has expanded his vision to go beyond his city and himself.

“It took several years of preparation and I’m so happy that the movie is finally a reality,” he said.

Check out “Trust No One” on all streaming platforms.

A fan steps into the ring during the Deji vs. Alex Wassabi boxing fight on YouTube