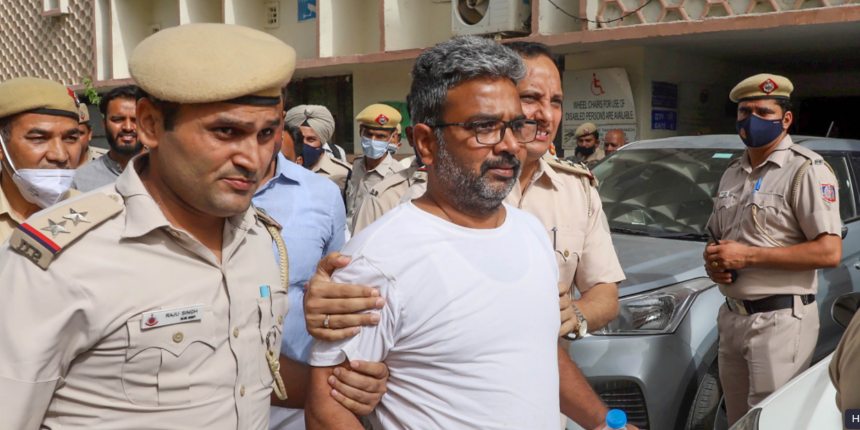 NEW DELHI: Composed, usually against the background of books and with a gamcha around his neck, Ratan Lal, a history professor at Delhi University’s Hindu College, stands in front of a camera to talk about BR Ambedkar and topics related to the Bahujan community on his YouTube channel, Ambedkarnama.

Long before a Facebook post brought the police to his doorstep, Lal had started posting videos on his Youtube channel in which he spoke about attacks on Dalits, trials against students and opposition leaders like Jignesh Mevani, attacks on Muslims during Ram Navami celebrations this year and more. Lal started posting videos about Ambedkarnama at the start of the COVID-19 outbreak and during a national lockdown imposed to control it.

He started his short video podcast series with one on the roundtable attended by BR Ambedkar and the rights of the depressed classes. This was posted on April 21, 2020 and garnered over 8,000 views. Today, his channel has 1.44 lakh subscribers and 13.6 million views.

On Tuesday, Lal wrote a Facebook post questioning the discovery of a shiv-ling in the Gyanvapi Mosque in Varanasi. On May 18, an FIR was filed against Lal. The decades-old mosque, adjacent to the Kashi Vishwanath temple, is currently facing a legal battle. On Friday, the Supreme Court transferred the case to Varanasi District Court so that it could be heard by an “experienced judge”. He was arrested on Friday evening and after a day of protests at police stations and UA’s North Campus, he was released on bail.

The channel’s description reads: “Our vision is to reach a wider audience by spreading the ideas and thoughts of Dr BR Ambedkar and other Bahujan icons. Our mission is to affirm the politics of social justice and constitutional politics and to disseminate related ideas to a wider audience through a variety of means.

In his last video posted hours after the FIR filing, Lal called it an attempt to drown out the voices of Dalits and proclaimed that he would not remain silent. “Every night, dharma gurus from both faiths come to discuss this topic which is really for art historians,” Lal said in his latest uploaded video.

Shortly after his arrest, a section of students and teachers from DU’s North Campus and even beyond came out to show solidarity with the history professor. 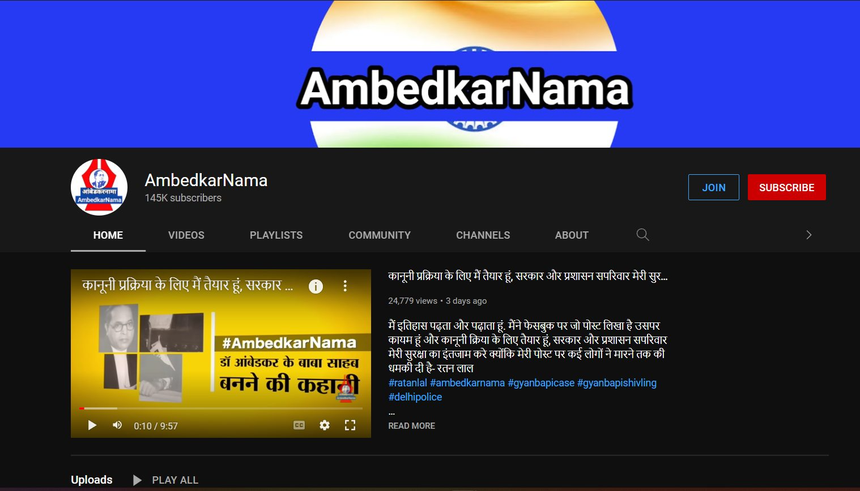 Citing examples from Rajasthan, Muzzafarnagar and Ravi Kant from Lucknow University, a Dalit professor who was attacked by a student on the university campus in the presence of a security guard, Lal discussed the growing intolerance against Dalits in India on his channel.

Kant was attacked for his remarks during an online debate on the issue of the Gyanvapi Mosque and was also the subject of a complaint against him. In an interview with Kant, Lal discusses the attack by students and calls for a detailed investigation into whether those who attacked were in fact students at Lucknow University.

In another video, Lal draws a comparison between the arrest of Dalit leader Jignesh Mewani, Jawaharlal University scholar Nehru Umar Khalid and labor minister Anurag Thakur. Mewani was arrested for two tweets, one of which criticized Prime Minister Narendra Modi during his tour of Gujarat this year. While Mewani was jailed for tweets, hearing Thakur’s case on hate speech during the Delhi riots, the Delhi High Court said: “If anything is said with a smile , then there is no crime”. Lal proceeds to plaster on a fake smile and criticizes Prime Minister Modi’s spending on a plane, car and suit while claiming to be a faker.

The Gyanvapi mosque is controversial

Lal, following the Gyanvapi Mosque case, brings in JP Singh, a veteran journalist from Allahabad to discuss the case as it unfolds. Since his Facebook post went viral, the channel has aired his interviews with various news channels on the issue. Speaking to a Lal, he said: “There was an attempt to terrorize people like Professor Ravi Kant and me. There is an obvious possibility of threat, but there is no point in being afraid. I wrote to PM Modi and the administration that there would be a threat on my life.

Speaking about the Facebook post, Lal clarified; “My intention was not to hurt anyone’s feelings. A historian is supposed to establish valid links and in this sense I have written about those who were defeated in the annexation. They are indicators of history. If feelings were hurt, it should have hurt both Hindus and Muslims. I did not write that it is not a shivling.

Videos that frequently criticize the mainstream narrative, particularly Hindutva ideology, have hundreds of comments, mostly appreciative but also the occasional threat. One of the comments in Kant’s interview read, “Strict action must be taken against Ravikant. This man is Anti-Modi, Anti-Brahman.

Follow us for the latest education news on colleges and universities, admission, courses, exams, schools, research, NEP and education policies and more.

Instagram posts – No, this press interview does not prove that the Buffalo supermarket shooting was staged