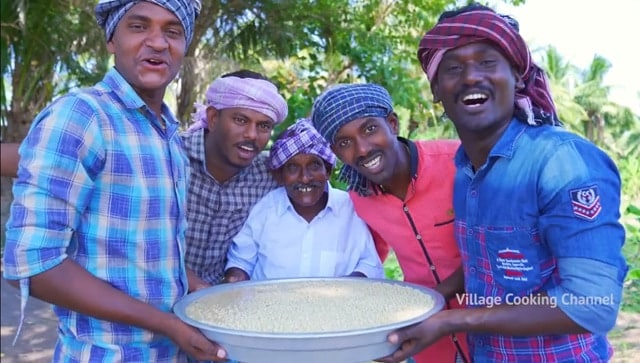 How village cooking channels on YouTube mix the traditional and the modern, my simple past with the digital future-Entertainment News, Firstpost

During lockdown, when many of us were locked away at home and in front of our computers, it was an escape into the world we had left behind. A world from which we never thought we would have to move away.

“Good food is like the music you can taste, the color you can smell.” Ratatouille got us. In this “Food for Film” series, we choose food films / shows that make our mouths water and our souls richer.

Growing up in the Everest business quarters of the 1970s and 1980s in Podanur, a suburb of the industrial city of Coimbatore in Tamil Nadu, the weekdays were spent at school, extended play sessions on the ground. , gymnastics on the swing and homework. Weekends were another matter.

Boys and girls collected twigs from dried branches early in the morning. Three bricks or flat broken stones would be tracked down somewhere and a temporary chimney would be installed. An aunt lent us her vases, oil and camphor, another gave us rice, a third dal, and someone else gave us vegetables, a brinjal or two, an onion and a tomato each.

The person living closest to our makeshift kitchen would get water from their house. And then we would start to light a fire in the middle of someone’s backyard and cook a meal.

When I grew up, I don’t really remember the exact taste or flavor of the boiled-type rice-dal mash that we cooked – adding spices, salt, water, and tamarind ( sometimes green tamarind crushed on a rock) until we were happy, but I remember it made our Sunday and Monday more bearable.

On rare occasions an aunt would lend an iron vaanali, and we were roasting crispy potatoes, the one vegetable that handled our childhood enthusiasm well. Even though you did get involved, it went pretty well.

I’m 46 now, and I still remember the smoke floating in the air, a group of us sitting on our hunches in someone’s backyard, stirring in front of a bubbling pot. The rice we served on a banana or kalvaaazhai The (canna) leaves were spicy, salty and sour, and we ate them with the pride of having cooked them. It was our kootanchoru (community food). It was our Sunday routine for many years until we grew up and discovered other things to do. But, even today, it is a memory that will certainly make you smile.

During the lockdown, Facebook, for some reason, started recommending food videos shot in villages. Suddenly I realized that decades later I was watching others cook as we once did, where the food was fragrant and flavored with love and companionship. The initial fire was started using camphor before twigs were fed to help the fire keep going. It helped that most of these videos were shot outdoors, amidst fields and gurgling streams, and featured mud pots, aluminum containers and kan alavu (eye measurement). No one has told you to add so many grams of this or that – it was all watched and added to the pot with great enthusiasm. The result? Brinjals that glistened with oil and spices, meats that fell off the bones, fish that had just been caught and cooked with basic spices … basically foods that did not require too many ingredients, but which celebrated the pleasure to cook.

More importantly, there was no mention of COVID-19, quarantine or death toll, and it was a relief when that’s all we consumed on social media. It was an escape fare, and it helped.

While village food chains have been around for a few years now, have created superstars like the late Karre Mastanamma, and served as a nice reminder of a bygone era and culinary traditions of the past, new-age content creators have branched out. in regional specialties. Banana Leaf Cooking, a page on Facebook (644,986 subscribers) with a presence on YouTube, presents the Coimbatore Kongu Tamizh dialect and is about a young girl who goes to the farm, wearing a thooku (container with a handful) leftover rice mixed with curd, peppers and onion. Some days she cooks before going to work. On others, she goes to the farm to cook everything from black chicken to flying fish (kola meen), after showing viewers how to clean and cut the flesh. Every now and then on some holidays when people choose to eat vegetarian, she cooks up a vegetarian fried fish – a raw banana cut to look like a fish! Light the kitchen fire with camphor. Cooking the banana leaf

The best part? It is one of the few channels where a woman also cooks and eats with enthusiasm. After getting used to pop culture where women eat delicately and choose food, it’s liberating. Food is not served well, but it doesn’t matter when it looks and tastes good. That smile on her face when she eats the food – priceless.

There is a group of five men, who are part of the Village Cooking Channel (537,000 subscribers), who have a big fan for their enthusiastic cooking adventures. An elderly man and four young people cook with relish, eat with joy and, most importantly, shout instructions. They always start their recipes with grinding manjal chaandu (turmeric paste) on a stone. Most green vegetables are picked near the cooking zone. For meen pollichathu, for example, where the fish is cooked after being wrapped in a banana leaf, the fronds are cut on the farm and cooking is done over an open fire. Between the instructions and the laughter and scream ingredient lists, they also convey helpful advice – like the perfect consistency to grind the vada To beat.

Why has someone like me, who stays away from any cooking shows, been drawn to these channels? I would credit the totally rustic background of the videos, the typical farmhouse sounds, and the glorious greenery.

During lockdown, when many of us were locked away at home and in front of our computers, it was an escape into the world we had left behind. A world from which we never thought we would have to move away.

These shows were pure nostalgia triggers, but also a soothing balm for the eyes and ears. Have I tried any of the recipes? Probably one or two, and I even used some of the advice they so happily handed out. But what these shows have done is give me reaffirmation that food can heal. And somewhere, I traveled back in time until I was 10, when I first realized that food was more about the experience than the end result. A happy cook makes a happy meal.

Subha J Rao is a consultant writer and editor based in Mangaluru, Karnataka. There, she keeps her love for cinema alive through languages. You can find her on Twitter @subhajrao.

Read more of the series here