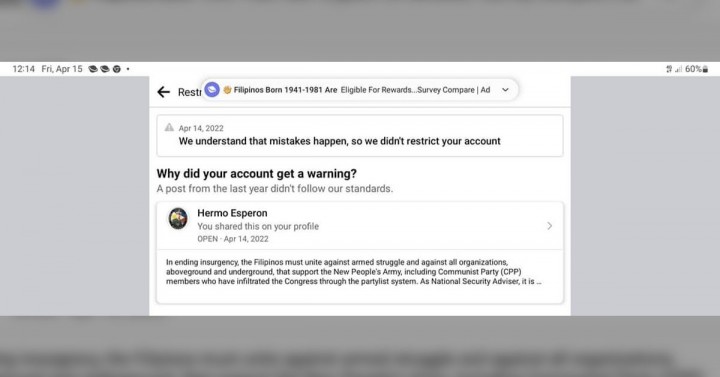 Egco released the statement after the US tech giant recently warned National Security Adviser (NSA) Hermogenes Esperon Jr. for a message urging Filipinos to unite against the 53-year-old communist insurgency that has already cost the lives of tens of thousands of people. Filipinos. Facebook has since restored Esperon’s post but without admitting he made a mistake, an implied admission of error.

Like Esperon, Egco said he and other officials critical of the Communist Party of the Philippines, New People’s Army, National Democratic Front (CPP-NPA-NDF), such as Presidential Undersecretary for Communications Lorraine Badoy , have been repeatedly “restricted” from posting on Facebook. .

He suspected they had fallen victim to so-called ‘mass reporting’, a flimsy mechanism built into Facebook that’s supposed to tackle hate speech etc, but is actually used and abused by surface and underground groups. linked to the insurgency to perform the take down of any message they deem contrary to their narratives or interests.

“Usec Badoy showed what a 21st century woman really should be. She doesn’t have to play the gender card. She showed more guts and courage than most men when she’s not chewing one word in calling a spade a spade. Such a woman of courage deserves our utmost respect – unrelenting and unflappable for standing up for the truth – and I stand with usec Lorraine Badoy,” the palace official added.

He said that if Facebook can do this to government officials, what more could ordinary Filipinos ask for.

Egco is also the Spokesperson for Mass Media Commitments and Fact Checker for the National Task Force to End Local Communist Armed Conflict (NTF-ELCAC) while Badoy is its Spokesperson for New Media and Sector Concerns .

“To avoid being accused of undue censorship and stifling free speech, Facebook should be more careful, discerning, and intelligent in restricting government posts whose sole purpose is to offer a brighter future for our compatriots,” Egco said.

“Let me remind Facebook that under the Universal Declaration of Human Rights (UDHR), it says everyone has the right to freedom of opinion and expression, and that right includes the freedom to hold opinions without interference and to seek, receive and impart information and ideas through all media and regardless of frontiers,” he added.

“Indeed, we echo the sentiment of the Department of Home Affairs and Local Government (DILG) that it is alarming and dangerous for Facebook to restrict posts by public officials who staunchly fight Communist Terror Groups (CTGs) operating in country, such as the CPP-NPA-NDF,” Egco said.

“Notice, if we allow communists to run the government, there will be no more freedom of speech and that will be the end of Facebook, Youtube, Messenger or Tiktok in the Philippines because these CTGs will never allow these media platforms social media to be used freely by Filipinos. They have zero tolerance for dissent. he added.

Egco said Facebook should heed the international community’s call to be vigilant but fair in its efforts to connect people of different backgrounds, beliefs and ideologies, noting that the Philippines has welcomed and allowed the giant social media to operate freely in the country without interference.

Egco said he personally knew the difficulties of joining the communist insurgency as he himself was a former student activist, cadre and later an NPA fighter.

He said he lost friends and scholarships and strained his relationships with parents and loved ones until he found the courage to leave the underground movement, embrace his family and rebuild his life.

Egco then took the journalism route until he rose from college journalist to editor to become chairman of the largest and one of the oldest groups of legitimate journalists in the country – the National Press Club of the Philippines.

Egco stressed that the main objective of the NTF-ELCAC is to have an insurgency-free Philippines.

“We are not against anyone who espouses an ideology, which is part of the freedom of speech that our Constitution holds sacred. What we oppose are those groups who recruit our children to bear arms for the violent overthrow of our democratically instituted government. We must work together to end this cycle of violence perpetrated by the CTGs. The government and Facebook can work together for the good of all Filipinos, especially since it is the most popular social media platform in the country,” Egco said, adding that PTFoMS had already partnered with Facebook to prevent the medium from being used to intimidate. or harass journalists and other media professionals with impunity, especially against women. (PR)