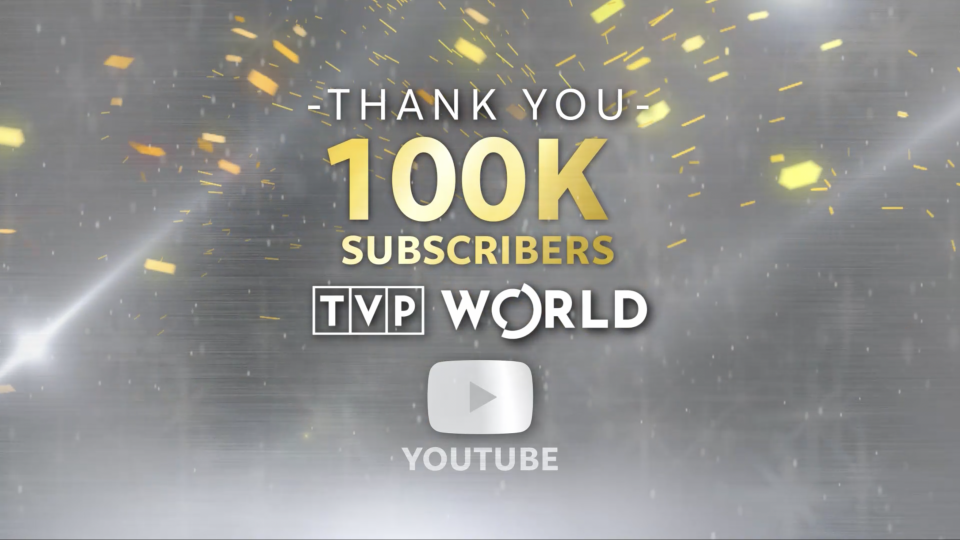 Bringing all the latest news and daily updates from around the world, TVP World is delighted to thank its viewers, and in particular its YouTube channel subscribers who have just grown to 100,000, for their continued support.

As Poland’s first English-language channel, TVP World offers a variety of programs that explore essential global and regional phenomena that have shaped the lives of billions of people.

TVP World News is the channel’s flagship news service where we zoom in on in-depth reporting at the heart of developments to get the big picture.

Since Russia launched its condemnable invasion of Ukraine, our correspondents have taken the risk of entering Kherson, Kharkiv, Odessa, Kyiv and other places to help the world see what atrocities Putin’s regime will be held accountable – targeting civilians and civilian infrastructure, disrupting adolescent and higher education, fueling poverty and mental wear and tear, as well as death and destruction.

Russia’s war against Ukraine has all the hallmarks of modern warfare – the use of unmanned aerial vehicles (UAVs), i.e. drones, medium and long-range missile strikes, sabotage, kinetic action in very dangerous areas such as nuclear power plants and large tank returns as a major factor on the battlefield.

These ins and outs of the military confrontation between Russia and Western-backed Ukraine are brought to you on TVP World’s much-loved show “Military Mind”.

The roar of cannons and the thunder of artillery can have devastating results, but so can the buzz of Russian fake news and disinformation. In “Break the Fake,” we break down Kremlin propaganda to educate our viewers about its malignant manipulation and, at times, ridicule the all too apparent absurdity of it.

There’s no better place to board the “Eastern Express” set than Poland. TVP World, thanks to Poland’s geological location and leading role in Central and Eastern Europe, aims to better illuminate regional developments that tend, due to distance and prejudice, to be distorted by other media . On the program, an overview of the Baltic countries, Belarus, Ukraine, but also Central Asia, Turkey and Georgia.

Business Arena offers a fresh perspective on everything that moves the global economy. With an in-depth look from our hosts, viewers get a lightning-fast look at the latest stock dynamics as well as an in-depth analysis of the impact of regional and global developments on the thickness of wallets around the world.

In these uncertain times, culture serves as a sanctuary where mind, body, and spirit can find creative fulfillment. TVP World’s “Pulse of Culture” is here for our viewers to hear and see the intricacies of music, film, sculpture and more.

“Rock Rachon” is a one-of-a-kind show hosted by the insightful Michał Rachoń who, seeing beyond the obvious, extracts the naked truth from political developments.

See you soon on the net !
Yet there is still much to discover about our programs, including our latest morning show World Today Morning.

Both Facebook and Snap Stock are cheap. Why stocks can still struggle.